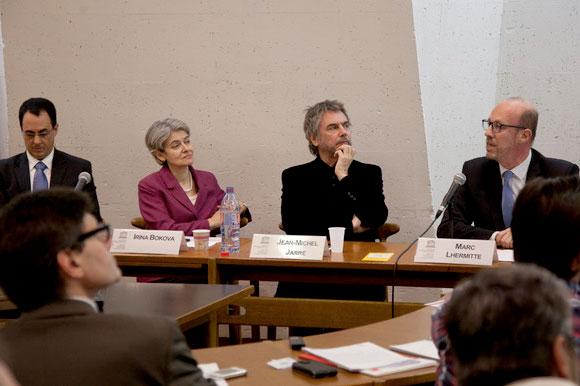 On 3 December, CISAC unveiled a new global study on the economic and social contribution of Cultural and Creative Industries (CCI) to the world economy.  Prepared by EY, the report "Cultural Times - The First Global Map of Cultural and Creative Industries" analyses the economic weight of 11 sectors - advertising, architecture, books, gaming, music, movie, newspapers/magazines, performing arts, radio, TV, and visual arts - demonstrating that CCI are a massive contributor to the world economy.  In 2013, these sectors together generated US$ 2,250 billion in revenues, equating to 3% of world GDP, and 29.5 million jobs (1% of the world's active population).  This represents more revenues than the telecom services worldwide (US$1,570 bn) and surpasses the combined jobs of the automotive industry in Japan, Europe and US (25 million jobs).

Opening the event, M. Oron introduced the speakers to a room full of participants, stressing the uniqueness of the study which, for the first time, assesses the weight of CCI on a worldwide basis.  Ms. Irina Bokova welcomed the publication of the study, which she called "excellent news", underlining that UNESCO was glad to be hosting its release.

"For many years," she said, "UNESCO has been calling for a better recognition of the role of CCI in fostering sustainable development and sustainable growth.  This work started more than 20 years ago [...] and continued with the historic adoption of the UNESCO Convention on the protection and promotion of the diversity of cultural expressions, which this year celebrates its 10th anniversary.  Time has come to take culture seriously in economic terms," she added.

Next to speak was Jean-Michel Jarre. He reminded the audience that:

Cultural and creative industries exist in the first place because a writer penned a novel, a play or a poem; a composer wrote a score; a songwriter put words and music together to give birth to a song; a painter brushed various colours on a canvas creating something unique; a filmmaker turned a screenplay into a piece of visual narrative; a sculptor carved shapes into marble or wood and gave them a life; and so on."

Jarre called the report "a landmark study for CISAC":

For the first time, thanks to this EY study, we have a clear picture of what creators and their related industries bring to the global economy in terms of revenues and jobs," he said.

Highlighting the issue of transfer of value, which enables Internet intermediaries to "build multi-billion businesses on the back on creative content", he called for legal frameworks that fairly and properly remunerate authors in order to ensure the future livelihood of younger generations of creators.

Jarre welcome the advent of the EY study as a good policy tool: "We can now go to policy makers in developing countries in Africa, South America and Asia, and provide them with the evidence that they should support their creative community, because they are a factor of economic growth", he said.  He also warn the audience that "cultural economy is also fragile".

"Our industries depend on strong copyright laws that protect the works of creators and allow industries to get financial returns on the projects that they invest in. If you touch these foundations, the whole system will be in danger. If we weaken copyright protection, the incentive to invest in creation will disappear, and the world will be poorer, not just in economic terms, but also in cultural terms," he warned.

Jarre finished on a high note, announcing the 90-year anniversary of CISAC and commending UNESCO for their unparalleled action in favor of cultural diversity.

Next to speak was EY partner and co-author of the study Marc Lhermitte who presented the study's key findings.  In addition to global figures, Lhermitte highlighted the impressive contribution of CCI to the digital economy: CCI are a locomotive of the digital economy, contributing US$200 billion to global digital sales in 2013.  Cutural and creative content also powers sales of digital devices, which totaled US$530 billion in 2013.  Digital cultural goods are, by far, the biggest revenue source for the digital economy, generating US$66 billion of B2C sles in 2013 and US$22 billion of advertising revenues for online media and free streaming web sites.

The production of cultural works is young, entrepreneurial and inclusive", Lhermitte explained, "It boosts cities' attractiveness and, in many emerging economies, informal CCI sales provide a vast reservoir of jobs for young people."

In his conclusion, Lhermitte described the challenges ahead to building a "more creative world"; he stressed the need to promote authors' rights, achieve scale as companies around the world race to exploit the best "content" ideas, pursue global expansion across emerging markets, balance online monetization of creative works and nurture creative talent.

Following a lively Q&A session, CISAC DG Oron reflected on the way forward, sharing with journalists in the audience CISAC's key policy claims.  Oron advocated for a legal framework that protects and values creative works, ensures fair remuneration for creators, particularly younger ones, and provides the stability that creative industries need in order to continue to provide economic growth and sustainable jobs.  He called for a system that recognises the liability of internet service providers (ISPs) in combatting the illegal use of creative works, and that defines "safe harbours" more specifically.  He reiterated the need for policy makers to address the current issue of transfer of value, which today benefits big Internet giants, to the detriment of creators.

The event, which attracted over 20 journalists from all over the world, generated strong press coverage with articles in over 200 publications.