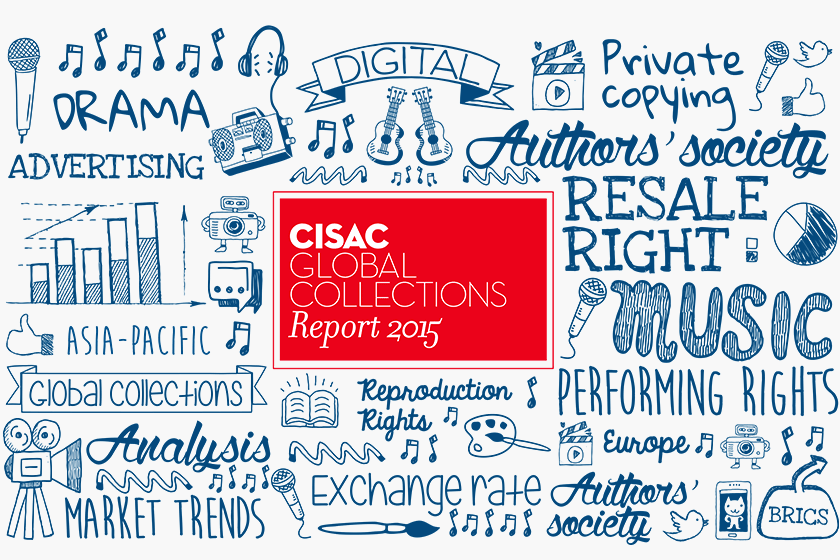 Paris, France – February 10, 2015: The International Confederation of Societies of Authors and Composers (CISAC) today released its 2015 Global Collections Report, revealing that, against a backdrop of continued economic uncertainty, total royalties collected in the year 2013 on behalf of over three million creators worldwide remained stable at €7.8bn.

"In 2013, CISAC member societies proved once again the importance of collective management of rights for creators around the world. Despite challenging economic conditions in many markets, total royalties collected by CISAC members remained stable. Excluding the impact of foreign exchange, the underlying growth trend of +4.6% in global collections is very encouraging for the future of the creative industries globally. Other positive reports include a jump of 17% in royalty collections in the Latin America & Caribbean region and a sharp increase of 8% in collections for audiovisual repertoire. The BRICS markets continue to show great promise leaping 30% over the previous year. These countries still have a huge untapped potential, with a mere €0.12 of collections per capita as compared to the €1.30 world average.”

Royalty collections from digital services are still relatively underdeveloped for authors.  Despite growing 25% year-on-year and reaching €380 million in 2013, they still represent only 5% of the total royalties collected by CISAC societies around the world. Commenting on these findings, Gadi Oron added:

“Royalty collections from digital services sharply increased in 2013 and we are extremely pleased with this result. Yet, they are still low and the potential for further growth is significant. In a world that is becoming increasingly digital, it remains a key priority for CISAC members to ensure that creators around the world receive a more equitable share in the online market.”

The report is also available in French and Spanish. Additionally, you can download the press release appendix which gives key highlights.