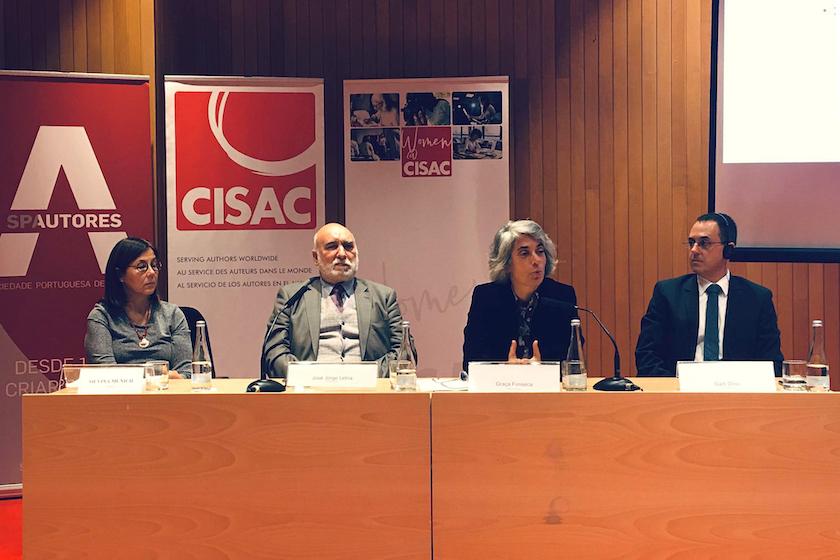 Out of 66 CISAC member societies regarding gender equality, women represent only 26% of board members. Only 22% of a society’s members are women. Only 20% of total income comes from women creators. These are some of the figures shared by CISAC Repertoires and Creators Relations Director Silvina Munich at the inaugural Women@CISAC congress in Lisbon, organised by SPAutores. CISAC members from throughout the world joined creators, academics and journalists.

The global CISAC initiative, Women@CISAC, seeks to share successful actions that can serve as examples to create guidelines to improve the gender balance among collective management organisations and to achieve a better future for the creative industries. Keynote speaker and ASCAP Vice President of International Affairs Elisabeth Rodda emphasised the need for each organisation to act, “A single company cannot change the world, but we can start to change the culture in each organisation where we work.”

In her opening address, Portuguese Minister of Culture Graça Fonseca underscored how essential promoting gender equality is to the creative industries. She pointed out that it is necessary to develop cultural policies dedicated to gender equality that involve the main actors in cultural industries. Minister Fonseca called upon people to do better, “May others come shed new light on the past, and that the past is not repeated in the future in regard to women’s copyright.” 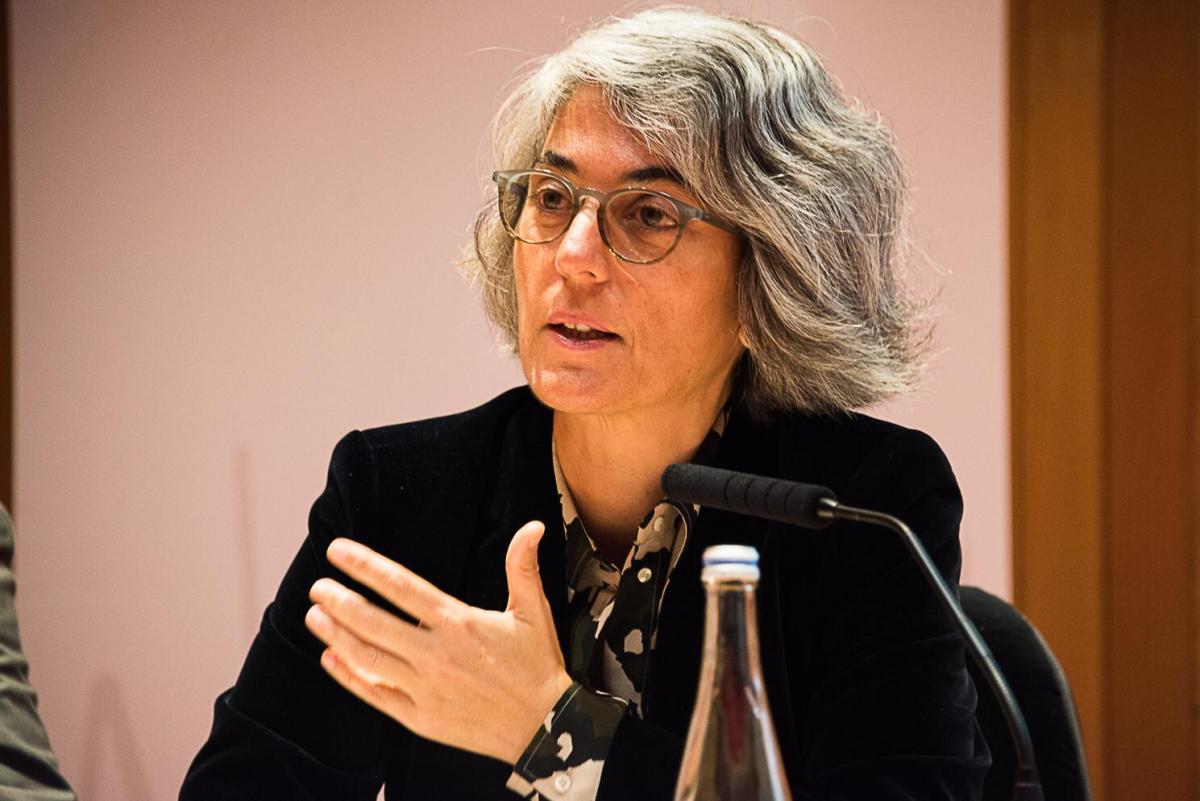 In a message, celebrated electronic musician and CISAC President Jean-Michel Jarre pointed out the urgency to fix inequalities, “The creative community does not reflect the global demographics, does not reflect society. Many women creators struggle to launch and maintain a long-lasting career. The obstacles they are confronted with are greater than those of male artists.”

CISAC Director General Gadi Oron reinforced the importance of creative and cultural industries in improving gender equality. Oron said, “The creative sector is an enormous influencer of human behaviour. Music, film, visual arts have a huge influence on people’s lives. Art shapes views. Art defines and re-defines social values. This gives our sector a position of responsibility and leadership. I am proud that CISAC, the only multi-repertoire global creators’ network, can be such an important forum for tackling the issue of gender equality.”

The importance of the congress reverberated even to the United Nations. Secretary-General António Guterres gave attendees the following message of encouragement, “...I am proud to see the Portuguese Society of Authors joining CISAC in this Women@CISAC project for the defense of copyright, the defense of gender equality, and the empowerment of women. Your participation-women-is ‘more necessary than ever'! Your contribution and your role in society are indispensable.”

The CISAC and SPAutores congress, held November 4th and 5th, encompassed a series of panels to provide a foundation of where collective management is currently with gender equality efforts. 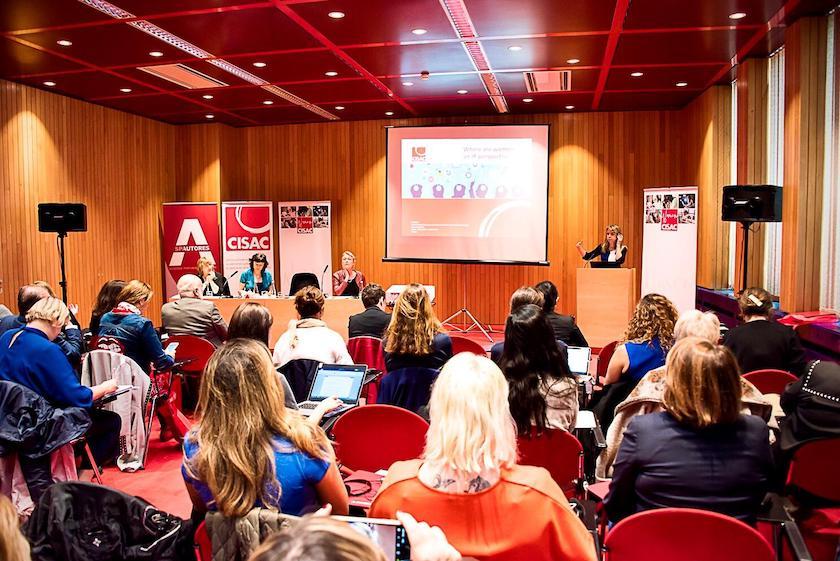 Wherearethewomen? To move forward, the first panel focussed on better understanding where we are today.
Photo ©: SPAutores

The first panel, #Whereareallthewomen?, drew attention to the fact that women are here and that the historical context that created barriers for women to not even have property rights in patents. Over time, this led to copyright laws and cultural policies that placed men in front of women. Women have always done it but historical evidence proves that women were treated differently. This meant that male endeavours would be compensated while those of women were only to be considered as “just creativity”.

Directors UK showed empirical evidence that there are many women working in creative fields but are not being given the same opportunity was male colleagues. SOCAN is helping change this mentality. The Canadian society is working to convince women that they do have necessary skills and to apply for board positions, which has led to a board composition of 44% women members in just a couple of years. The panel helped show that it is possible to effect meaningful change when looked at from both sides. Women will step forward if room is made for them.

A panel on mentorship, sponsorship and training spotlighted efforts that organisations have put in place for members. Putting these programmes in place can increase satisfaction among women in their careers. UBC runs a 50/50 mentorship programme in Brazil to promote equity. 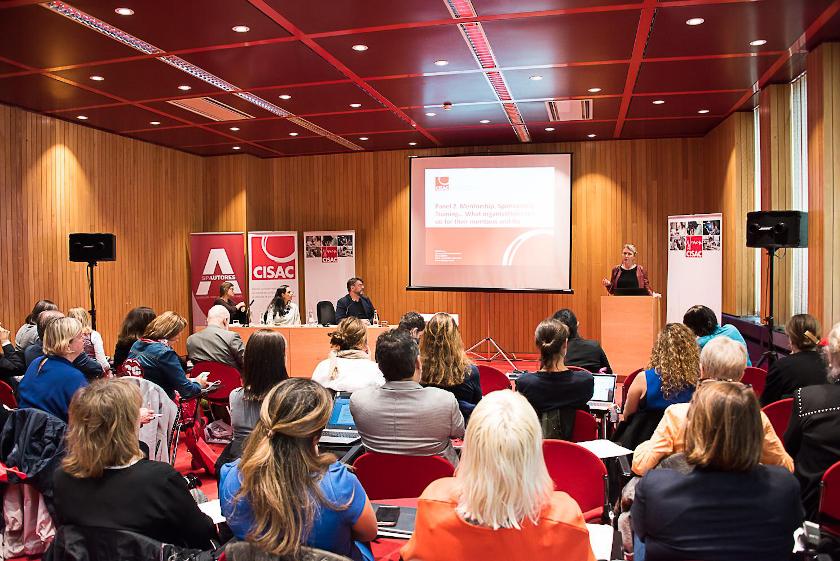 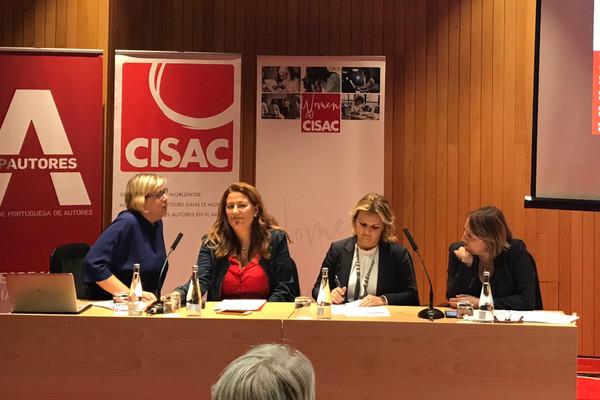 The "Women as an asset in the culture industries" panel examined creating conditions for a fair and equitable career and workplace.
Photo ©: SPAutores

When countries enact legislation, positive change can follow. In Spain, a gender equality law exists. The country has proven that when there is a balance of 50% women and 50% men performing, more performance tickets are sold. This equal representation of male and female artists has also been advocated with the Keychange pledge to reach “50:50 by 2022”. Keychange Project Manager Maxie Gedge explained that it has already attracted 280 music organisations around the world to sign this pledge to reach a 50:50 representation. 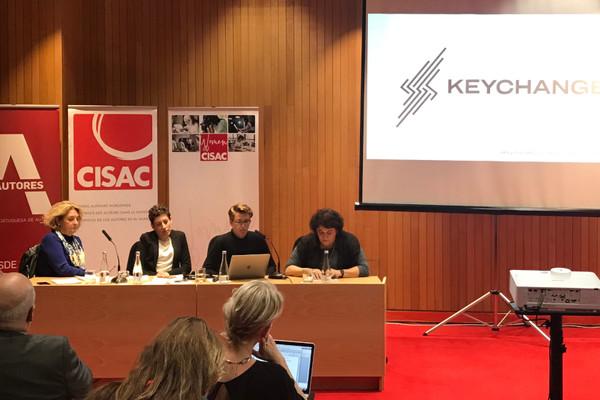 The final panel on the first day looked at how women are moving forward in the cultural industries, including learning from Keychange.
Photo ©: SPAutores

Yet policy and public funding still has to catch up to a growing body of evidence that shows women are an asset. In a panel on women moving forward in the cultural industries, the Council of Europe discovered that women receive only 16% of public funding versus 84% of funding going to men. Society of Audiovisual Authors Public Affairs and Communications Manager Annica Ryngbeck elaborated in this panel about the pay gap and other issues faced by women in the film industry. For example, there are more women as screen players than there are women as directors.

The Women@CISAC congress debuted the first-ever gender equality survey across CISAC’s membership. 66 out of 237 member societies responded with the majority responding from the music repertoire. Among the results, the survey found:

To work towards improvement among societies, guidelines for collective management organisations and CISAC emerged from the Women@CISAC congress, among others: